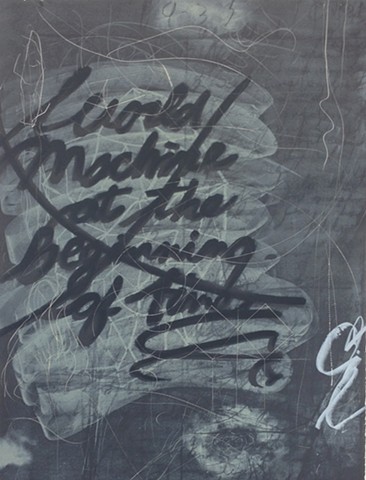 "World Machine: at the beginning of time" was a quote by the 13th century philosophical theologian John Buridan. Buridan was undoubtedly linking the creation of the heavens and earth to human agency by suggesting this outrageous notion. It was at his point I began to think about printmaking's between nature, the medium a metaphor for bending time and space. ---

Living between the virtual and the physical realities of experience, our sense of place is increasingly destabilized by the placeless virtual geography of technology and the social, political, and environmental conditions that have become of a cultural evolution from modes of production to those of consumption. Mark Bovey’s work attempts to explore this complexity, by using universal and personal references in print and installation works that integrate the polarities.

Interested in the real and “the appearance,” he uses trompe-l’oiel strategies from virtual lithographic stone digital works, printing from hyper-real digital stones with traditional hand printed means. World Machine is composed of virtual stones, incorporating digital projection elements to extend the illusion of real spaces, giving the viewer a simultaneous sense of understanding and disorientation.

Derek Besant, on the the exhibition World Machine at AP Gallery, Calgary Alberta