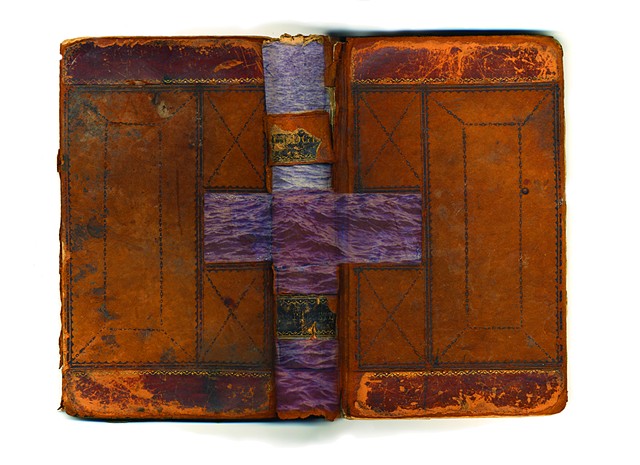 What lies beneath...
next >

The LEDGE_ Suite now numbers 20. They are 87X119 cm inkjet prints on 300gsm Hahnemuhle cotton rag paper created in a digital matrix. The backdrop is a readymade leather bound accounting ledger dating to1895 and additions come from a full range of printed and electronic sources, a collage of recorded documents spanning time. On the spine you will see the R is missing leaving the word LEDGE_. The book first the collected the debits and credits of late industrial age industries in and around Toronto and Buffalo. After a seven year holding period it became a scrap and scribble book for my great grandmother Almina and later my grandfather Jack between 1902 and 1935 before being placed in an attic as a family keepsake. Inside the children practiced their math, wrote poems, played games and pasted clippings from fibre based newspaper articles and chromolithographic magazines. The Depression Age additions served to remind me of the needed distractions in a world of wars and starvation. During this time paper was expensive and these hand me downs provided a surface in which children could play and dream. My working class English Bovey family lived next to and married into the Pecor family who owned the accounting company where the book came from.

I now see this tome as a symbol of capitalist decay. The images and printed texts are here a reversional backdrop, reminders of a past, linking fragments of a problematic colonialist past to the musings the impressionable. In While Adrift, the plight of the world oceans is in question, in Wunderkammer (German for cabinet of curiosities or wonders) a looming cloud threatens a dark history of colonial opulence and scientific inquiry alongside childhood innocence, and in There is a tear… the book is intended to suggest the precariousness of earths state and certain vulnerability due to abuse. Each of the open pages suggests its own content which was further enhanced by my additions from the present time.

With these works, the digitally printed image is necessary to create a sense of hyper-reality which suggests the very present means and time of the works making, while amplifying an omnipresent sense of threat or anxiety in the worn and stained pages. I intend to continue to revise and update each and to save the former versions as records preserving a compiles living history.